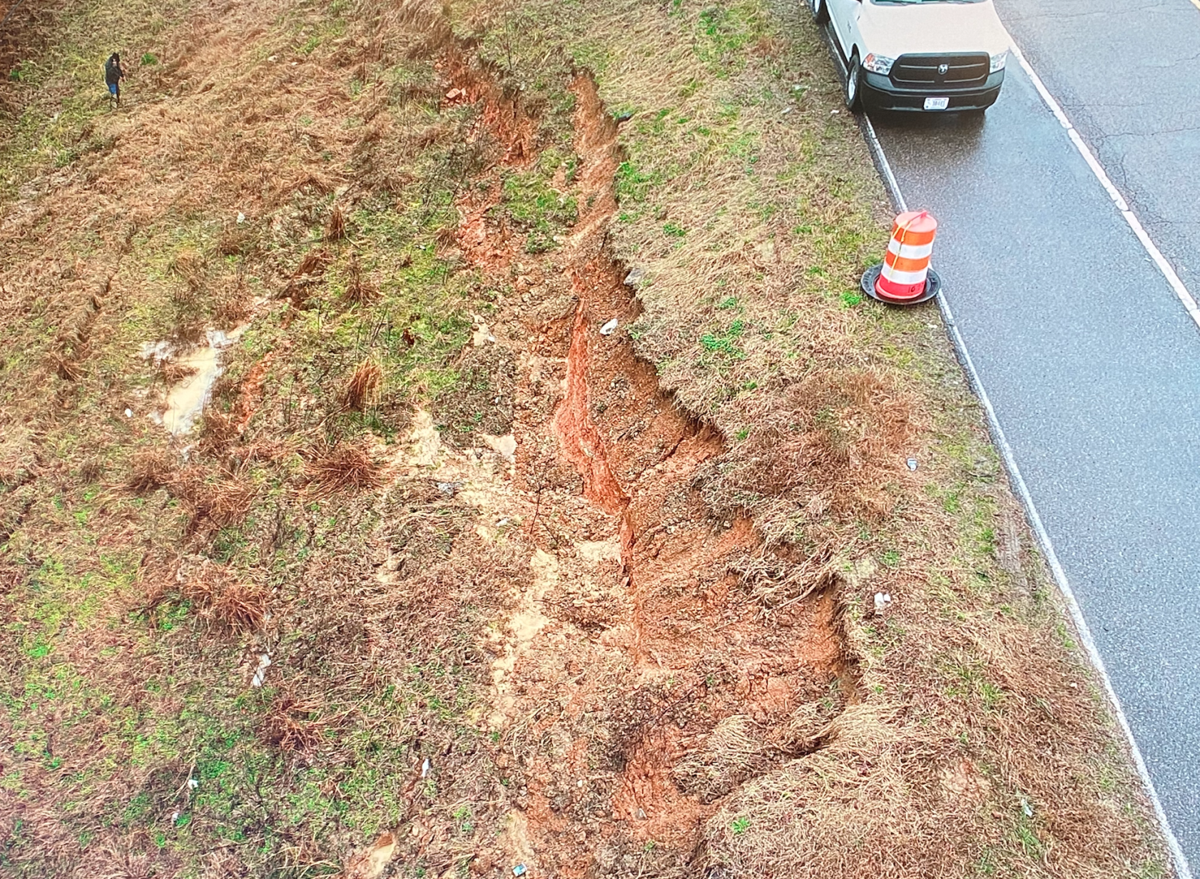 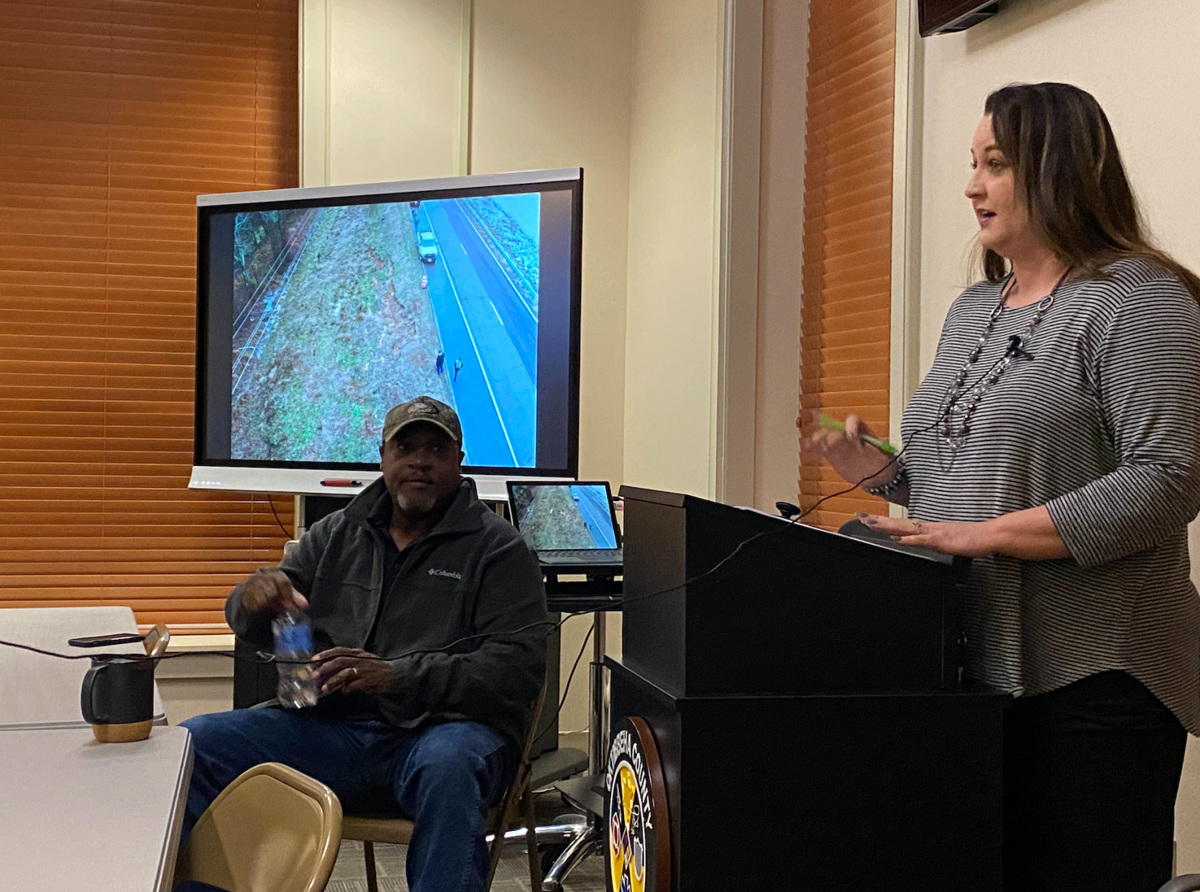 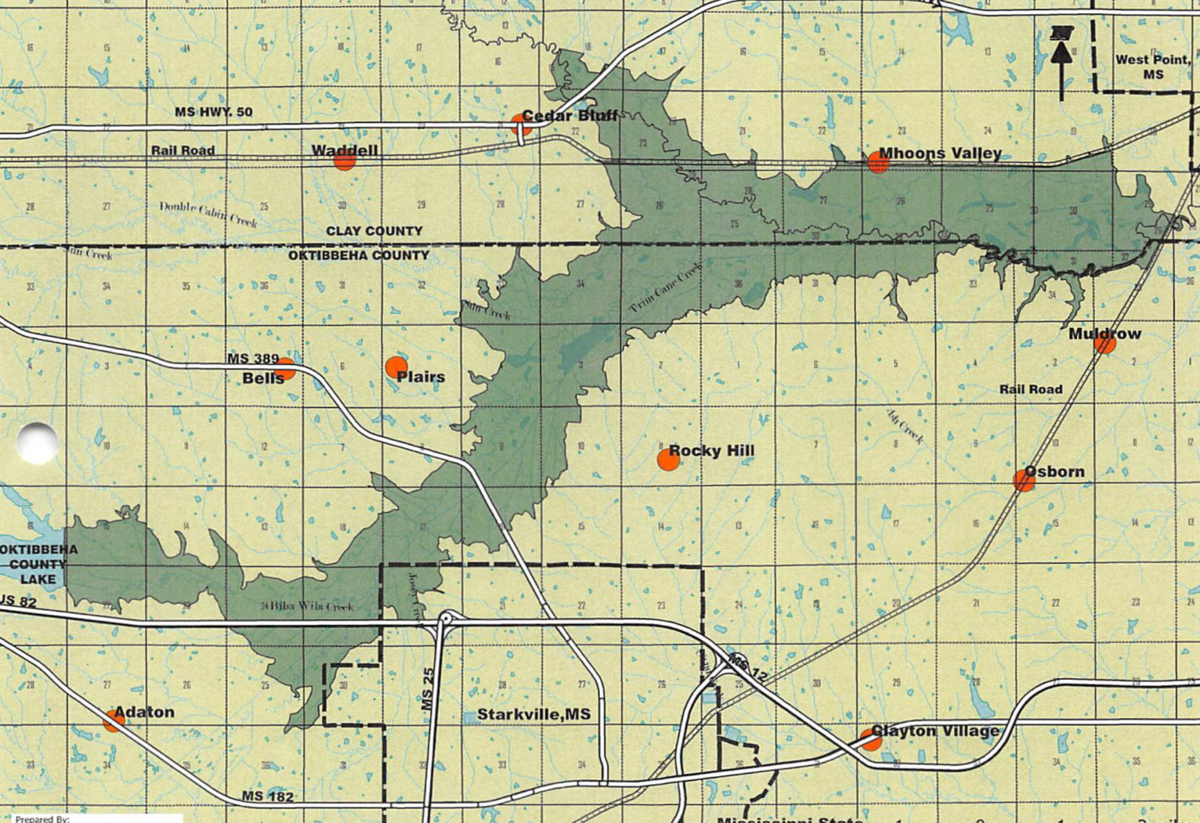 With Oktibbeha County Lake in the bottom left-hand corner, the dark green on the map shows the inundation area in the event of a full dam failure (Courtesy photo)

An early morning inspection of the Oktibbeha County Lake dam on Tuesday revealed potentially disastrous conditions as water has begun deteriorating the structure and threatening dozens of homes in the area.

County Engineer Clyde Pritchard inspected the dam around 7 a.m. Tuesday and discovered the problem. Another inspection at 11 a.m. showed continued deterioration as a mud slide on the levee worsened, prompting the county to enact an emergency plan to prepare for the dam's "imminent" failure.

Rain held off for the rest of the day, though, which had officials thankful as the situation seemed to briefly stabilize.

At a 5 p.m. briefing, Oktibbeha County Emergency Management Agency Director Kristen Campanella said the area east of the dam would see severe damage by water should the structure fail.

She said the situation had somewhat evened out as rain held off later in the day Tuesday, but more rain was expected on Wednesday, with another significant rain event forecast over the weekend.

Over the next 24 hours, the National Weather Service expects about half an inch of rain for Oktibbeha County, which Campanella said translates to four feet of water in the lake and more pressure on the strained levee.

Campanella said emergency preparations have been made and crews from Mississippi State University and OCH Regional Medical Center are available to evacuate large numbers of people if mandatory evacuations become necessary.

According to the county’s action plan for Oktibbeha County Lake, there are approximately 130 households or addresses in the area that could be impacted in the event of a dam failure. As of Tuesday night, Campanella said only one wheelchair-bound resident requested to be evacuated and was able to do so with assistance from Mississippi State University Parking and Transit Services.

Campanella said since there is no emergency or tornado siren in the inundation area, local law enforcement and fire officials will ride through the area with lights and sirens engaged to alert residents of an imminent threat.

In the event of a dam failure and mandatory evacuation, evacuated residents will be taken by bus to either the Oktibbeha County Safe Room on Lynn Lane or the Red Cross shelter at First Baptist Church.

Pets will not be allowed at the shelter, Campanella said, but can be boarded at the Oktibbeha County Humane Society on Industrial Park Road. While the shelter will not come out to pick pets up, they will accept drop-offs.

The county storm shelter was opened temporarily on Tuesday as a staging area, but was closed after no one needed access to it, Campanella said.

In the event of an increased threat of dam failure, Oktibbeha County will send out a CodeRED text message to those in a polygon for the impacted areas.

“We will send it out if we see some seepage or that slide gets worse,” Campanella said, referring to the mudslide seen on the levee, where dirt is being eroded away by water from the lake.

Starkville-Oktibbeha Consolidated School District Assistant Superintendent David Baggett attended the briefing Tuesday night and said the district will reroute buses away from the levee portion of County Lake Road until the situation improves.

The full road will remain open until further notice.

The dam is located in District 3, and its county supervisor, Marvell Howard, has long called for repairs to be made to the structure.

On Tuesday, he met with emergency officials and gave an update to those living in the area.

“Everybody now is sort of on standby,” Howard said Tuesday night. “Everybody is aware of what needs to take place if we have to make that call [to evacuate] in the middle of the night.”

UPDATE: at 2p check nothing had changed since 11a, which is a good sign, likely because of not getting any more rain. There is no warning siren in area. Emergency officials will come through with lights and sirens to warn of imminent threat if it occurs overnight pic.twitter.com/UIqpazN4ga

The problems facing the dam currently, Howard said, were in the same location where a repair was made years ago.

"This particular location was a location we repaired a couple of years ago in 2016, and it's failed," Howard said.

The county engineer, Pritchard, also warned county officials in 2016 of safety concerns posed by slope deterioration, which was caused by the water level of the lake fluctuating. Slope work was done in 2017, but was viewed as falling short of addressing the full scope of needs for the Oktibbeha County Lake.

As recent as last September, supervisors mulled grant options to fund a complete replacement of the aged levee, but the project has yet to come to fruition.

Howard said on Tuesday that water from the lake had seeped between the dam and the ground beneath it, placing the integrity of the structure into question.

The county has had long-reported problems with seepage at the dam, but with recent rain, the problems were quickly noticed.

Howard did say the county brought in four 12-inch lines to help alleviate some of the pressure from the levee by pumping excess water into the county’s emergency spillway.

County officials said they will continue monitoring the situation, and Howard said they will be looking for continued evidence of "sandy-brown water" that would suggest more of the ground beneath the dam had been washed out.

A more immediate sign of failure would be a constant stream of water coming out from beneath the dam. Howard said this could signal a quick deterioration of the dam, possibly indicating a breach could occur in as little as 45 minutes.

Evacuations of the area east of the levee and in the flood plain were strongly encouraged by county officials, as the water would be uncontrollable if the dam failed.

"If it actually breaches, we won't have much time at all," Howard said.

Campanella said barricades and road signs were in place to block off closed roads if needed.

Howard said roughly 250 people could be affected by the dam's failure, himself among them.

“I would probably be the first house," Howard said. "I live within throwing distance of the levee right there.”

Inspectors from the county and the Mississippi Department of Environmental Quality continued monitoring the dam. Campanella said the results of those inspections would ultimately determine if mandatory evacuations were issued.

Another inspection was scheduled for Wednesday morning at 7 a.m. unless overnight rainfall was reported.

According to a two-year investigation conducted by the Associated Press, Mississippi has one of the highest number of dams in danger of failing, though the Oktibbeha County Lake dam was not listed in that investigation as being one of the state's most hazardous.